Leah is the proud mother of seven bright, funny and fun-loving sons. Her house is always busy and loud, but that’s how she likes it. Each boy has their own unique personality and adds to the family unit in their own way. Shmuel loves to sing, from chazonos to Chassidic classics – he loves it all. Mayer is super sociable, always surrounded by a group of friends. Levi has a heart of gold, he’s the family ‘chesed’ man, loves doing favors for others. Moshe is the family’s practical joker – he loves to make everyone laugh! Shimi is obsessed with sports, he can spend hours in the garden playing ball. Dovid loves helping Leah in the kitchen, he dreams about opening his own restaurant one day. Eli is the baby, young but oozing with personality and you’ll never see him without a smile on his face.

One thing they all have in common, is their love for learning and knowledge.  Until recently another thing they had in common was their trouble with reading – simply reading a sentence was a struggle. Leah was on the edge of despair, especially as the older ones reached Bar Mitzvah age and were still unable to read. She employed every tutor, took them to every reading specialist and therapist, but nothing helped and it was affecting every facet of their lives – school, friends, home etc. 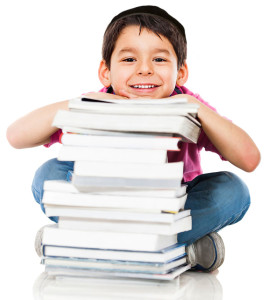 “One day I chanced upon an advertisement in the Mishpacha Magazine for Neurolinks,  claiming  that through their Physio-Neuro Therapy program they were able to help children read. I had literally tried everything so I was quite skeptical, but thought I’d give them a call. I spoke to Chayala of Neurolinks Lakewood, she was unbelievable! She took the time to explain every step of the program to me and how the program would benefit my children. Her belief in the program and her confidence that she could truly help my children, gave me every reason to sign up.

I decided to start the program with Shimi, my third-grader, and take it from there. Let’s just say, at the beginning I kept expecting miracles, but I literally ended up witnessing one! First Shimi struggled to read 7 words in a 20 seconds, but after 3 weeks he was averaging 20 words in 20 seconds. It was hard work, but it was worth it. It wasn’t long before I found him curled up on the couch reading.

Needless to say, I decided it was time to enroll my 12 year old, Levi, in the program as well. His Bar Mitzvah was fast approaching and he dreamed of reading from the Torah, just like his friends. With Chayala’s encouragement and perseverance, this dream was realized. When Chayala came to wish me Mazal Tov after Levi’s Torah reading, my eyes welled up with tears. I couldn’t express my gratitude enough. Chayala and Neurolinks literally changed our lives.

I’m looking forward to signing up my other sons and finding books strewn around my house!”

In the summer of 2006 Mrs F. and her husband moved from Israel to the US. They had two small children at the time and were sure that their daughters were so young the move would not affect them socially or academically. When they  enrolled their oldest daughter Sara in first grade, the school recommended that she be put in Pre-K, but Mrs F. insisted she would be fine in first grade. Sara started in first grade and experienced severe learning difficulties. Her teachers were not accommodating or willing to help and Mrs F. saw her struggle the entire year, unable to help her.

Fast forward a few years, Mrs F’s second daughter Miriam began experiencing the same issues as  Sara. Miriam was only 9 her mother did not want to relive those struggles again. She received great reports about Miriam throughout the year and then right before summer vacation, the teacher set up a meeting with Mrs F. to tell her that Miriam was having problems focusing and concentrating, that her grades weren’t up to par, that she wasn’t doing well socially and that she was immature and irresponsible. Mrs F. was shocked and distraught! Firstly that Miriam was struggling and secondly, that the teacher only decided to tell her parents at the end of the school year – what should they do?

“I left the teacher’s office in tears and as I was walking to my car I bumped into a friend with whom I shared what had happened. She suggested that I look into the Neurolinks program, which she thought  might be able to help. I asked around, did some research and gave the Neurolinks office a call. The program seemed a perfect fit for my daughter and I didn’t want her to suffer any longer. It was not an easy commitment, but I decided to sign her up because if it could give her a new lease on life it would be worth it!

After going through the program, Miriam is now at the top of her class with grades of 99 and 100 which seemed impossible just a short while ago. She is a changed person – popular, mature, responsible. Her teachers continually comment on how well she’s doing. She expresses herself beautifully, is easy to talk to and understand.

“Neurolinks is a present you can give your child for life.”

The best thing about the whole experience is that she is thrilled with the new version of herself. She feels fulfilled and loves the fact that she can now focus and excel in math, grammar, science etc. She also loves all the compliments she is receiving! Before attending the program, Miriam had a terrible memory and would forget everything her teachers asked of her; now she can remember what is expected of her and participates properly in class. Miriam has become so confident and mature, she knows what she really wants from life. Her reading skills have improved tremendously, she is a fluent reader and works hard to receive good grades.

Neurolinks helped instill core values and life skills in Miriam at such a young age, and gave her the encouragement she needs to strive and achieve. I’m so proud of my daughter, it was extremely hard work but it was completely worth the effort. Neurolinks has made such a difference in our lives that I have now enrolled my third daughter in the program.

Neurolinks is a present you can give your child for life.”

Daniel was always a good student in high school, receiving such good grades that he  even made valedictorian of his year level. Despite his good marks, Daniel knew he had difficulties retaining information and remembering things. This meant that he had to work super hard, much harder than all his friends to achieve the grades he did.

The problems grew when Daniel went away to Yeshiva, where the boys were expected to sit and learn for up to 12 hours a day. Daniel had problems focusing, sitting still, remembering things, and he was quite impulsive. All these are serious problems in such a competitive learning environment. After a while Daniel started having heart palpitations and trouble breathing due to the intense pressure. He went to see doctors and even a cardiologist, who all told him that he was stressed and the only solution would be to remove himself from such a competitive atmosphere.

Daniel knew he couldn’t actually leave the program, so he went to see a psychiatrist who ended up prescribing medication for mild ADHD. Daniel hated how he felt when he took the medication, he felt weird and his life became a nightmare.

“I saw an advertisement for Neurolinks in Mishpacha’s Family First Magazine, describing all my symptoms, so I called the Neurolinks office to arrange an evaluation. After learning about the program, I decided that although I would be taking a chance I needed to take the plunge. I knew that I would need to put in the required time and effort into the program to make it work, but I decided to see it as a life-time investment.

My first session was the night before Passover. I found it easy in the beginning, but then it started to really challenge me and I saw great improvements. As the weeks progressed, I found that my problems were beginning to dissipate. In fact the program worked so well that I finished early, in only 20 weeks. The staff was great to work with and they really had an invested interest in my progress.

By the end of the program my memory had greatly improved and I am now able to sit for an entire class and follow what is going on. My impulsiveness also improved, I no longer insult people and have become much more sensitive to others needs. This was probably the most impressive change for me and it has literally changed my life. I am more confident with my friends and less insecure. I am now off medication and a much more relaxed person.

My 19 year old brother has now come home from Yeshiva in Israel to complete the Neurolinks program, because he sees how it totally changed my life!”